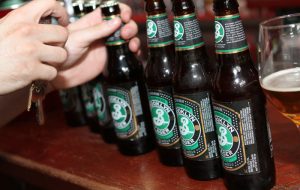 Craft beer has been on the up for many years now and more and more people prefer to drink craft beer as opposed to mass produced favourites on the market. Because craft beer has become so popular, many restaurant operators have jumped on the bandwagon and have started to source products from local microbreweries.

Is the time right to pleasure your customers with some local craft beer?

People of all ages have tried and continue to try craft beer. But it is the millennials who are driving the industry and it is because of them that we see such a profound growth. These are people in their 20 and 30s who have taken a real fancy to craft beers and the various flavours they provide. This group of people like to know more about the beer they drink and why the brewer decided to focus on certain types of products.

Craft beer was once known as a man’s drink, but this too has changed. Women now stake a large share in the craft beer market as they enjoy a variety of brands from Hawke’s Bay Brewery and other brewers up and down the country.

When it comes to regular craft beer drinkers, most of them come from a higher socioeconomic background. Because craft beer is slightly more expensive, some drinkers are afraid to spend that extra bit, but once they do, they tend to stick with craft beer because of the quality ingredients and taste they offer. Today’s millennials love the idea of local microbreweries supplying local bars and restaurants. This has also had an influence on the older generation as they in turn look to try craft beer.

There are many advantages to adding craft beer to your restaurant menu. If you look at the market over the last decade, it is easy to see that craft beer has taken a large chunk of the shares and that growth pattern looks to continue into the future. When you offer craft beer, you tend to get a loyal following who constantly come back for more.

Craft beer drinkers like to be adventurous and most of the time they will try quite a few different brands in one sitting. This is obviously good for business as you make more sales with people who like to drink craft beer. By offering special brews, you will entice them into your restaurant and boost revenue.